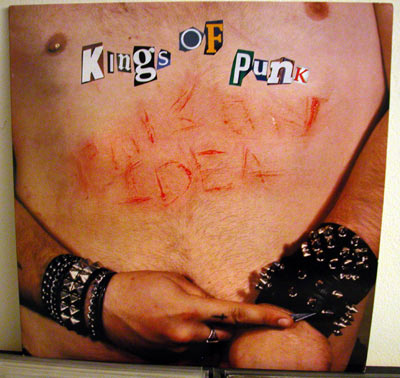 I’m not sure where I first heard of Poison Idea. I think it was this actual record which opened my eyes to them, and only because it was on Pushead’s label, and after buying the Septic Death record and the Cleanse the Bacteria compilation, it sold me on buying anything on the label.

Poison Idea formed in 1980 and were from Portland, Oregon. The initial lineup was Jerry A. (vocals), Pig Champion (guitar and single largest man in hardcore history), Chris Tense (bass) and Dean Johnson (drums). They put out their first 7″, titled Pick Your King in 1983 on their own label, Fatal Erection Records. The following year they put out a great 12″ EP titled Record Collectors are Pretentious Assholes. The cover art was a punk record collectors wet dream featuring stacks upon stacks of rare punk records strewn about on the floor and in stacks all over the room amongst their amps, etc. The title was rather ironic seeing as they were record collectors themselves.

Portland’s greatest export found themselves a year later appearing on the aforementioned compilation on Pusmort Records and that led to Pushead wanting to release a record by his friends which brings us to this record. This is easily the bands finest moment. The music is blazing hardcore punk with a bit of rock mixed in there and it just knocks you on your ass from the first notes of the first song. The cover art was not a gimmick, singer Jerry A. actually carved that into his chest for the cover photo.

Shortly after this record’s release, Johnson and Tense were both fired and replaced by Steve “Thee Slayer Hippy” Hanford (drums) and Tim Paul (ex-Final Warning, who put out a 7″ on Fatal Erection, bass). They also added an additional guitarist named Vegetable. At this point they started going in a more metal direction and put out the War All the Time album on the long defunct Alchemy Records, which was the label started by David Portnoy of Dehumanizers. Poison Idea put out a few more singles and an album or two all while various members kept dropping out until Jerry A was the sole original member left.

This particular album was reissued on both Taang! and more recently on Reflex Records and is also available on CD through Taang still I believe.

As always if you have additional information or were a member of Poison Idea, by all means get in touch.

Listen to “Lifestyles” from the record.