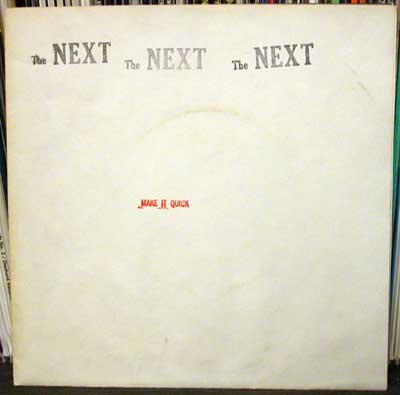 Selections from The Punk Vault [The Next]

Texas is famous for its great (and in many cases relatively unknown) punk bands. From the more popular ones such as The Dicks, Big Boys, Butthole Surfers, DRI, and The Offenders, to the more obscure (except to record collectors) like Hugh Beaumont Experience, The Huns, Vomit Pigs, and The Next, the state has an impressive track record for great bands.

It was when this single was included on the Deep in the Throat of Texas compilation LP that I first heard it and fell in love with it. The record has three songs, and all of them are amazing early punk tracks full of attitude.

According to the liner notes of said compilation, The Next were from Austin Texas and formed in the wake of the Sex Pistols playing a show in San Antonio. The Next became a regular band performing at Raul’s (and are included on the Live at Raul’s compilation) probably because their singer, Ty Gavin, was a bartender at the club. In their small time together the band went through a few lineup changes and put out only two 7″s, this one and their second one titled Kick Ass (which I am in need of if anyone can help me out). According to what I’ve read, their sound changed quite a bit on the second single and it wasn’t nearly as good. Where the members are now is anyone’s guess.

As always if you have any additional information, or were a member of The Next, please get in touch.

Listen to “Monotony” from the record