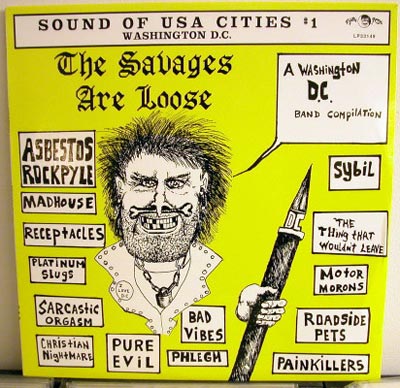 Selections from The Punk Vault [The Savages Are Loose]

In the mid to late 1980s, Mystic Records, having already put out countless compilations, decided to start a series of compilations from different cities across the USA. The first one was a compilation of mostly obscure Washington DC bands. Aside from Madhouse who already had a record out, most of the bands were relatively new and this was their first, and in some cases only, release on vinyl.

The real standout for me was from a band that until I got this compilation, I had never heard of and that was the Platinum Slugs. It turns out they put out a couple of records and I am looking for them if anyone can hook me up. The rest of the compilation was pretty standard fare hardcore bands.

After this record, more followed in the “Sound of USA Cities” series including Portland, OR and New York City. It wasn’t long after those that Mystic went quiet for a number of years. This record is slated to be reissued on CD in the future and the others will likely follow.

Listen to “Easy Mark” by the Platinum Slugs from the record.