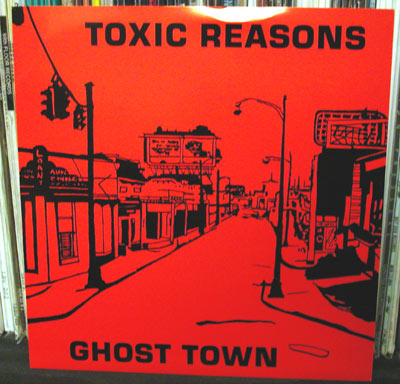 NOTE: Since this originally was posted, Ed Pittman contacted me and shared a little bit of history of how the band started, which will be at the end of this original post.

Toxic Reasons started in Dayton, OH in 1979. The founding members were Bruce Stuckey (bass & vocals); Joel Agne (guitar & vocals); Ed Pittman (lead vocals);Mark Patterson (drums).In 1981,Mark Patterson left the band and was replaced by James J. Pearson (J.J.) on drums,and Joel Agne was replaced by Rob Lucjak (Snott) on rhythm guitar,and Greg Stout on bass,Bruce switched to lead guitar.Though the band was from Dayton,J.J. was from Canada. They used this Can-Am Connection to make their logo which featured the Canadian and US flags combined. I think it made some unsuspecting folks think they were a foreign band.

They released the now sought-after War Hero 7″ in 1980 and that is the only record featuring all the original founding members. One year later they did this record after signing to Risky Records during a tour. They ended up moving to San Francisco shortly after that. They recorded their first (and best) album in Indianapolis with Paul Mahern of the Zero Boys. Shortly after the album’s release, lead singer Ed Pittman left the band, leaving the rest of the guys to carry on without him.

What happened next is a story that is all too familiar, they kept at it, and sounded more and more metal. I saw them once in 1987, and had it not been for the completely shitty and young White Zombie being the opening act, and thus blowing them offstage in the suck department, at the time it was one of the worst bands I had seen. It would be years before I would forgive them enough to actually give their records a chance and find out that early Toxic Reasons were a really good band who put out 3 damn good records. After a few lackluster releases, the band fell apart and packed it in.

Where are they now? That I do not know. I do know in 1999 they did a “20 year anniversary” reunion show. About two years ago or so, Beer City Records reissued the Independence album with all new cover art. The rest of their catalog remains out of print with the exception of a foreign release that compiles rare tracks called Dedication.

The song featured here would end up in a different version on their Independence album, but this is the superior version. I also happen to really like the cover to this one.

As always, if you have any additional information, or were in Toxic Reasons, please get in touch.

UPDATE: Ed Pittman, original vocalist for Toxic Reasons, had a little bit of history to share with my readers, which is:

Toxic Reasons got together approx. September of 1979. I was visiting friends at an apartment complex one evening when I decided to walk down and get a Pepsi at FHE Pool House. The acid id eaten was starting to kick in. I had only walked a few doors down when I heard two guitars blasting “God Save the Queen”.

I walked up and knocked, Bruce Stuckey answered wearing his guitar. I asked are you guys playing the Pistols? The answer was yes. Bruce invited me in, I warned him I had just taken some acid. He said great, so had they. This is how I met Bruce Stuckey and Joel Agne. They were in a cover band called Exodus. I went to a couple of their practices and decided to steal them if I could. Before their next show, I talked them into going to see DOA in Dayton with me. DOA blew our heads off, and Randy Rampage invited us to an after hours where we drank many beers and got schooled on the coolness of punk rock.

Bruce and Joel had a show to do with Exodus the next week. It turned into hillbilly quaalude hell. Following that nightmare, the three of us got into my vega wagon and before we could leave the parking lot Bruce and Joel said “fuck this stupid shit we wanna play punk rock”. They weren’t sure about me as a singer until the first time we rehearsed and I just started jumping like a crazy man and singing Pistols songs they knew. The first drummer we tried out and kept was Mark Patterson, a recent graduate of the high school jazz band.
He was great. He was into punk and only 17, however when he showed up the first time he told us he thought we were playing psychedelic music because our name was Toxic Raisins. Once we got the name straight the music came naturally. I think we wrote “War Hero”, Somebody Help Me” and “Ghost Town” that first week or two. We played these at our first show in November 1979 in Dayton along with Pistols and Clash covers. Bruce was the bass player then, with Joel Agne on guitar and Mark on drums.

Listen to “Ghost Town” from the record