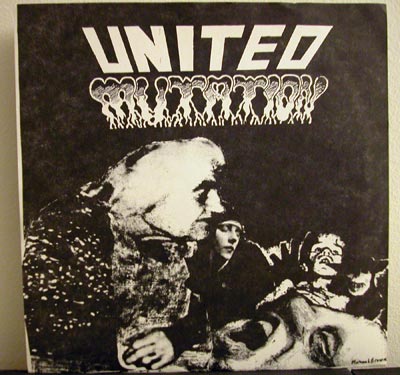 United Mutation was a band I hadn’t heard of until their label, D.S.I., sent me one of their 7″s in the mail to review in Spontaneous Combustion. I liked it and eventually went backwards and found myself a copy of this record, partially because I liked them, and partially because it was a half-Dischord release and I am a fanatical Dischord collector.

This was a single that I had planned on doing a feature on, but didn’t know much of the band’s history. It was one of those bands that I was hoping I would find someone who was in the band to share their story. Luckily for me, someone in the band found me! Jay Fox, bassist for United Mutation, contacted me recently and was kind enough to share the United Mutation story with me.

United Mutation formed out of the foundations of a bedroom garage band called DARK SELF IMAGE (DSI). Dark Self Image was basically an outlet for us to play; our Singer (Noel Hollingshead) wrote a whole bunch of crazy poetry and we would get high and jam while he narrated. This outlet later got bigger with addition of real amps and drums. Our first drummer, Steve Kirkland, was a neighbor, but quickly quit to play more normal music. We then started the first real band which featured Mike Brown on drums, Noel on vocals, John Fox on guitar, Bob Otte on guitar and John Hardin on guitar/vocals. This line up lasted until fall 1981. At this point Noel moved away, John H. moved to New Mexico at the first of ’82,and Bob quit, which left us with just Mike who didn’t (and doesn’t ) drive so he couldn’t really commit to the band at that point.

We played our first gig Christmas ’81 with Sean Sumner (later of Death Piggy) on drums. He was at the time playing in PBI, which featured Steve Hansgen (later in some DCHC bands of note). This was a typical NOVA (Northern Virginia for the uninitiated – ed) house party, but it did instill in the Fairfax scene that there was a real hardcore band in town.

At about the same time we met Mike Salkind (the Aborted) who later became our drummer. In early July we went into Inner Ear studio and recorded our first demo (featured on both Freaks Out and the Lost & Found CD). This featured Sean Sumner on drums as Mike wasn’t ready to record at the time. We also continued playing parties in NOVA now using Mike Salkind on drums until John H. left. At this point Mike Brown re-entered the picture as our singer. This was the beginning of United Mutation.

We played our first party as UM Halloween of ’82 with Media Disease (later Malefice, MFD, Mainline, etc.) We also recorded our next demo, featuring Mike B on vocals and Mike S on drums, recorded at Inner Ear and produced by Bert Quiroz (Double-O, Second Wind). The tracks on Mixed Nuts Don’t Crack came from this session. We ended up the year by losing Mike S on drums; he went on to play drums in NO TREND. We ended up getting Bill Fox, a schoolmate of Mike’s, on drums and later recorded the Fugitive Family EP, and also played the 9:30 club.

Billy left the band to join DSI brother band Malefice, as he was more into that style of punk. We then got Steve Kirkland back in the band as the rock scene was not too hip to having black drummers in white hair bands. Needless to say we were quite happy to have him back. We went back into Inner Ear and recorded our next demo with Steve and Mike B; this landed us a track on Fountain Of Youth records comp, Bouncing Babies (“Infinite Regression”) as well as a couple of tracks that ended up on Freaks Out.

This was to become our most prolific period. We returned into Inner Ear to record the Rainbow Person EP, which was well received by the punk press. We also started playing out a bit more, landing gigs with bands such as Dead Kennedys, Butthole Surfers, MDC, Flipper, Meatmen as well as numerous slots opening for local acts and smaller national acts.

This went on up till about 1988, when John Fox left the band to work on DSI Records full time. Mike joined Second Wind, featuring Bert and Rich from Double O and Steve Hansgen. Steve and I started FLUFFY with John Cobbett from Malefice, which lasted about one gig, and then started Fat Louie, which featured Brian Malone on trombone and a guy named Mike (???) on guitar. This later fused into BULLHEAD after Mike quit.

At this point we got John Fox back on guitar and could have gone back into UM but decided to change the theme of our music to a more psychedelic hardcore then just the standard UM stuff. Bullhead started out as just myself, Steve, and John, and later incorporated Mike B on guitar/vocals and Brian M on Trombone. This format was somewhere between Hardcore and Hawkwind; it also generated a bunch of weird gigs around DC/VA region. We later lost Steve (again) due to work issues.

After we got longtime UM fan Ken Bidjje Cavanaugh (Bells Of) on drums, we later went into WGNS studios and recorded the only studio Bullhead tracks. This period found us doing more UM and less Hawkwind, and eventually we ended up doing some UM shows in the mid ’90’s. Bidjje left around ’95 and Steve joined up again for some full blown UM reunions as well as a yet to be released demo recorded at Cue Studios in NOVA.

In 1998, Mike Clayberg (Malefice, MFD,) and I put together Mainline, which featured Kent Stax (Scream) on drums, Keith Campbell (BMB) on guitar, and Sean Epstein (Sisters of Morrissey) on vocals. This got us a few gigs and a demo from Inner Ear, which has yet to be released.

In 1999 Mike and I started a new group, the Wooleybacks, featuring Sean on Vocals, Alex Daniels (SWIZ), and Bob Craver (52 Pick-up, Slim Nickey etc.) on guitar. This line-up was working on an X style of drinking man’s Punk. This landed us a handful of gigs. At the same time I was working with Bidjje and John Fox on an all-Hawkwind Cover band. This band featured John Stanton on lead guitar (Redeemers) and Bill Turney on synth, theremin, and keys.

Since the final demise of UM….

Mike Brown has been working on his own musical projects, and has release a couple of disc’s under the name of Monkey Style. Mike is also spending a lot of his time doing artwork professionally. You can find him at UC Studios online.

John Fox has not been playing any music for the most part. Though has been helping with the launching of Living Nightengale Records.

Billy Fox is living and working in the NYC area, and is playing mainly jazz and Latin music.

Steve Kirkland has disappeared and no one knows where he is living or working.

Ken(Bidjje) Cavanaugh is living and working in the DC area, and is still playing drums, working on a series of different music projects.

Mike Salkind is living in Colorado Springs CO, and is still playing drums, mostly with the band Eggamuffin.

Currently I am playing with two different band projects in Denver CO, The Jane Wymans/Anesthesia, and Birdmanray. These bands are regularly playing shows in the Colorado area. As well as recording new music.

Anesthesia were included on the first release from LivingNightengale Records “White Cold Days” music from the Antarctic Music Scene, which is a compilation of bands from McMurdo Station, Antarctica. This is available from www.livingnightengale.com or from www.antarcticconnection.com

Thank you Jay for the great information! I’m not sure the status of their old recordings, whether or not they are available somewhere. I’m pretty sure Lost and Found Records vanished so that stuff is likely out of print these days.

Listen to “Passout” from the record