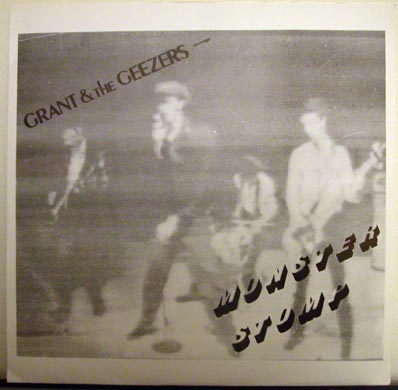 Selections from The Punk Vault [Grant and the Geezers]

Grant and the Geezers was a band I came across almost by accident. A few years ago, a fellow I know from Phoenix sent me a video of an old show from Mad Garden. The show was TSOL, JFA (the reason he sent it to me), and Grant and the Geezers. I had never heard of the band before, but I found their set to be an interesting one. A little searching around the net clued me in on the fact that they had released a 7″back then, and thus led me to placing it on my want list in hopes of someone having one to trade or sell to me.

One day, I got an email from someone asking me if I was still looking for that 7″. The fellow’s name just so happened to be Grant Cleaver. Not knowing the full name of Grant, from the band, I found it to be an awfully big coincidence that someone named Grant was asking if I needed that 7″ so I asked him if he was the Grant from the band and sure enough it was. He ended up sending me one of those records and I sent him a DVD that I burned of that old video of his band playing as he didn’t have a copy of it.

Grant also happened to be employed at the ticket broker that Tony Victor of Placebo Records owns, and was the one who put me in touch with Tony so I could do that little interview about Placebo Records for my Spontaneous Combustion site. Tony was someone I’ve wanted to find for many years because I wanted to know more about the history of his label, and his booking shows at Mad Garden.

I asked Grant, who it turns out is one hell of a nice guy, if he’d share a little history of his band with me for this feature and he was kind enough to send along the following.

We thought we wanted to be a rockabilly band. But after an incident in the woods where some of the band members were buttfucked by a wild bear we became what we refereed to as buttfuck-abilly.(nice huh). Released the 45, “Monster Stomp”/”Space Cruise”, and became regulars at Tony Victor’s Mad Gardens club, playing shows with Misfits, Black Flag, Social Distortion, etc. Played a lot of shows around this time in L.A. at the Cathy de Grande and other punk clubs of that time. Geezers went on a self financed tour of England in 1982 and while there recorded some tracks for Big Beat Records of which their version of “Folsom Prison” ended up on the Rockabilly Psychosis LP. Geezers also appeared on the TV cable show New Wave Theatre.

So there you have it. Grant still lives in Phoenix and works with Tony Victor. I do not know what became of the other members, perhaps Grant will chime in with a comment if he still keeps in touch with them. The Geezers total output consisted of this 7″ and the compilation he mentions above (which now that I know of its existence, I’ll have to track down a copy). Their music is a style that seems to be much more appreciated these days than it might have been 23 years ago when this thing was released and was certainly outside the norm in an era where hardcore was king, but therein lies its charm.

Thanks for the info Grant!

Listen to “Monster Stomp” from the record