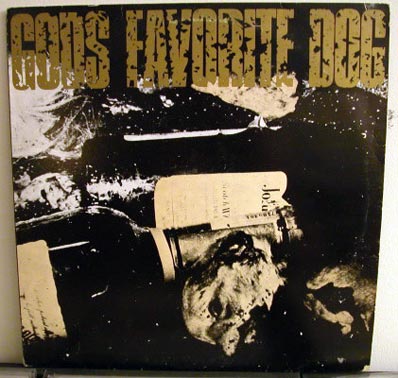 This is another one of those “why in the hell haven’t they reissued it” records, especially considering the label who issued it is still around. In 1986 Touch and Go released this fine compilation that documented a lot of its current artists, as well as some artists that had never, nor would ever, put out a record on the label.

I remember the anticipation of this coming out back then because it was going to have exclusive tracks by Big Black, Butthole Surfers, and Scratch Acid, any one of those bands would have been enough to get me to purchase the record, having them all on there was icing on the cake. The full lineup was Butthole Surfers, Killdozer, Scratch Acid, Hose, Happy Flowers and Big Black with each band contributing two songs. All of the bands with the exception of Hose (which was Rick Rubin’s band) and Happy Flowers put out records on the label. How it came that these two bands not on the roster would end up on here is anyone’s guess but they certainly fit in with the sounds of the other bands they shared this platter with.

I recall sometime in the 1990s there was rumblings about this coming out on CD along with some Touch and Go anniversary collection but sadly it never saw the light of day and I have no idea why. The Big Black tracks on here never made it on any of the CD reissues they did, so they remain unavailable to anyone who doesn’t have a copy of the vinyl, which is just a crime because they are two of their finer tracks (the song featured here being one of my all time favorite Big Black tunes). The Scratch Acid tracks were different versions of songs that appeared on their one and only full-length, Just Keep Eating and also never made it onto the CD collection that Touch and Go put out on them. In fact, I’m pretty sure the only tracks that did get released elsewhere were the Butthole Surfers tracks, on some rarities collection they released on their own label after they sued Touch and Go for their back catalog and sadly won in what was one of the most heartbreaking lawsuits to read about, where friendship was ended in the name of greed.

So why this hasn’t been reissued remains a mystery. It goes without saying that were it to come out now, it would have to omit the Butthole Surfers tracks, but why not release the rest of it with some bonus tracks, or as part of a collection of rare and out of print old releases from the label (there is a handful of 7″ vinyl from the old days that is long overdue for some reissue treatment)? I guess only Corey Rusk can answer that question.

A note of record nerd trivia, this record saw a few different pressing variations over its life span, all having different color ink on the covers. There was blue, pink, gold (shown) and green.

As always, if anyone has any additional information, please get in touch.

Listen to “Every Man for Himself” by Big Black from the record.