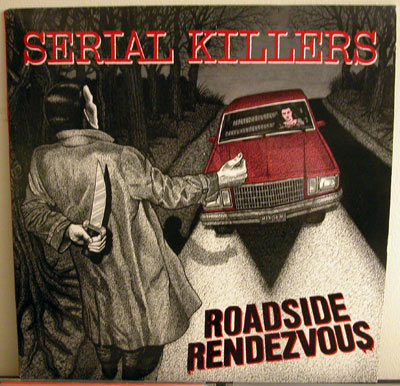 I can’t recall how I first came to hear of this band, it was either the fact that someone from Condemned to Death was playing with them and I read about it in MRR, or it was simply the fact that this record was on Plus Records, and I loved that compilation that they put out (featured in a previous Vault selection). Either way, when I first saw this record in a store (which just so happened to be Rose Records in Downers Grove) when it was released, I snapped it up.

Aside from the C2D ties, I didn’t really know much about the band aside from their having a charismatic lead singer by the name of Paul Bearer, and that they only put out two records before disbanding, this LP and then a 7″. Through this site a fellow by the name of Jimmy, who was a former band member, got in touch and shared some history with me.

The Serial Killer’s roots lie in Condemned to Death, a Frisco band that lived in the Vats (very famous punk squat) with MDC and the Dicks. In fact, much of the Serial Killers first sets were songs Tim wrote for, or played with, C2D. I heard Tim say once that Jello Biafra was going to be the singer for the Serial Killers but a bad breakup made him decide against it for some reason. Anyway, Paul Bearer was in Frisco with Ruin for their shows there and must have found a good pot smoking buddy in Tim Omen, cause eventually Paul Bearer returned to Philly and a little while later Tim moved to Philly and the Serial Killers started soon after. The first show was opening for Samhain at the kennel club.

Mixing gran Guignol with rock and roll and pro wrestling was actually a new concept at the time and though they will probably dismiss the idea, I personally saw a member or two of Gwar at a Serial Killers show in the audience and then Gwar having a similar stunt to one the Serial Killers just did at their next show. Not many people remember when Gwar was a little straight edge band with no makeup and Gwar stood for Germ Warfare And Recovery. Well the Serial Killers ruled Philly for a while playing with DOA, Mudhoney, TAD(opened for us), White Zombie, Murphy’s Law, The Hard Ons, L7,and many others. There were many personnel changes, but the core of Strangler Tim Omen and The King Paul Bearer was consistent. By the time the album was released the lineup was Tim(guitars), Paul(vox), Randy the rapist Mayhem(drums), Bates(bass), and Mega Jimmy (background vox, sound check vox, stunts, effects coordinator). Our steady go-go victim, Ghoulina Bately, had just left (and later was a real victim in a famous Philly Murder)and Mega jimmy usually recruited victims from the audience, or talked one of his girlfriends into it. By the time the first tour started Bates had been replaced by Robin Graves on Bass.

There was to be more as he had written “to be continued” at the end of the story but sadly I never heard from him again and my last two emails went unanswered. Perhaps Jimmy will see this and share the rest of the story with us.

After this LP they put out a 7″ titled Gary Heidnick’s House of Horrors” that was about the serial killer of the same name and many copies of that record came with a small bag of dirt from Gary’s yard! The band continued to do shows for quite awhile after that but eventually just faded away. I do not know what any of the members are up to now.

As always, if you have any additional information or were in the Serial Killers, please get in touch.

Listen to “Dead Bitch” from the record.