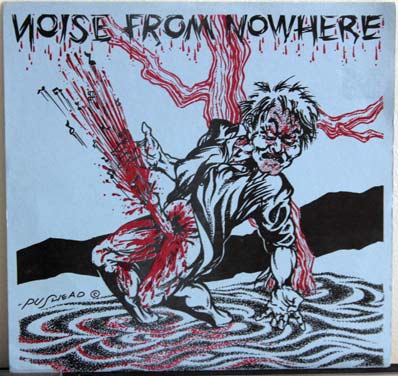 Selections from The Punk Vault [Noise From Nowhere]

When I was a freshman in high school, my friend Mick Calhoun had more punk records than anyone I knew at that point (and the total amount of punks in our school at that time was about 7). I asked him if he would tape some stuff for me because being so young, I didn’t have a whole lot of access or money to buy many records. He kindly obliged and asked me what I wanted and one of my requests was the Peace Corpse 7″. He not only put that on the tape, but one side of this compilation because “one of these bands became Peace Corpse after this record”. I loved the two songs he recorded (as well as the entire tape for that matter) and eventually I was able to procure my own copies of all those records he taped for me. So much for “home taping is killing music” huh?

This record was released in 1983 and was the first release on Toxic Shock Records, who at the time were perhaps the most amazing punk record mailorder/store around. I remember getting their catalogs and drooling over them because they had so many records available, and I learned about bands and labels for the first time just by reading that catalog. When I actually got a job and earned some money, I would occasionally place orders from them because they had stuff that no store near my house had, or would dare carry. Toxic Shock records kept going after this and put out some really great hardcore records by bands like Peace Corpse, Raw Power, Mad Parade, Dayglow Abortions, Decry, and others.

There was four bands on this compilation; Manson Youth, Kent State, Modern Industry, and Moslem Birth. Moslem Birth is the band that became Peace Corpse after this record was released. Many people thought they were some sort of real death rock band, when in reality their whole gimmick was supposed to be making fun of Christian Death. Despite it being a joke, I really liked their gloomy contribution to this record and the Manson Youth song was also a fine slab of straight-up hardcore. Moslem Birth never recorded anything else, Manson Youth recorded some other songs at the time that didn’t see the light of day until 10 years later when Dr. Strange Records released a pair of 7″s of those recordings, which much like Toxic Shock, was the first release for their label. Kent State were on a compilation or two but I don’t recall them ever releasing a record of their own and Modern Industry had a 7″ that came out a year or two later on Toxic Shock Records.

The whole record was great from the packaging with the classic Pushead cover art, right down to the four songs contained on the record, yet somehow this record seemed to have been overlooked compared to other compilations that came out around the same time. Thankfully the music has been preserved for future generations on a CD that compiles four early Toxic Shock records that was released a few years ago on Dr. Strange Records.

As always if you have any additional information, please get in touch.

Buy the CD reissue from Amazon