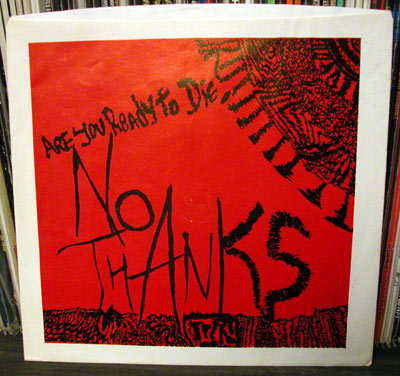 Selections from The Punk Vault [No Thanks]

Quite a few years ago on a planned Xmas trip to MI to visit my dad, the holiday came a little bit early in what turned out to be the last great record score before ebay had completely ruined record collecting and turned every slab of wax into some high priced collectible to be sold like baseball cards. A friend of mine up in MI got a call from a local record store guy who said someone traded in their whole collection of old punk singles. My friend asked him to hold on to them as he knew someone who would probably want a lot of them and would be in town in a week. That person of course was me! I called the guy at the store and he read off to me what was there and after each one, I’d ask the price. The prices were so good that I stopped asking and just told him “I’ll take all of it”. There was some great stuff in there, a good percentage of it I had, or used to have and was wanting to replace, and another good chunk of stuff I needed, wanted, or never even heard of. Among the latter, was this 7″ by a band called No Thanks, who I never heard of until stumbling across this vinyl booty.

When I got home after my little trip, I was so excited about the large stack of 7″s I got that I think I stayed up most of the night to play them all. I put on that No Thanks 7″ and was surprised that I had never heard of them before because it was some really good, female-fronted hardcore punk. They were from New York City and that was about all I knew from the information on the sleeve. Google searches turned up pretty empty as far as any band information went and when I decided I wanted to share this record with the people, I feared it was going to be a really short feature that would be limited to “Um, these guys (and gal) were from New York and this was their only record and if you have any additional information, please let me know”. As fate would have it, lead singer Donna Damage found me! I got an email from her one day completely out of the blue asking me something about JFA and mentioned that she was in No Thanks. I instantly wrote back and told her my intentions and she was quite happy to share a little story with me.

No Thanks was Rob, Seth and Jimi in the summer of 1982. I answered a Village Voice want ad for a punk HC singer, auditioned and got the gig. We recorded this demo about a month later at Noise NY studios in Manhattan.

Another month later, Rob left the band, Jimi took over on guitar, and Jaime joined the band.
No Thanks then became an autonomous collective and we started writing our material as a band. Many, many gigs at A7 with terrible equipment made us a tight unit. I remember one particular evening when the bass drum head was a pizza box.

A7 was a second home to all the bands hanging out in the East Village in the early 80’s; Bad Brains, Urban Waste, XKi, Savage Circle, Rapid Deployment Force, Agnostic Front, False Prophets, Undead, Ultra Violence, and Fathead Suburbia, to name a few. When hardcore bands were not playing their sets, Dave (A7) usually had reggae blasting and everyone was smoking pot and hanging out. My sister Debra and I used to hand out love beads, very punk!!!

A most favorite person of mine manning the front door @ A7 was a Vietnam Vet named Leroy, one of the coolest dudes on the lower east side who shared his wit and stories with us punk rockers. I lived on E.11 Street between B & C at the time in a five floor walk-up slum that most of the time had no heat or hot water with Jimi, Jaime, and my sister Debbie. My neighbors included most of the bands I mentioned. It was a common thing for members of many bands to overrun the back of Lesko’s, a Polish coffee shop on Ave A. and eat breakfast or to organize a 3am totally wasted soccer game in Tompkins Square Park.

No Thanks played many shows, opened for the Dead Kennedys at Beacon Theatre in 1983. False Prophets, Bad Posture and MDC shared that stage and was the biggest crowd No Thanks graced.
We were poor, barely able to afford our rehearsals, but this period was the richest time in my life with friendships worth their weight in gold. A lot of people from the NYHC scene died early, I still miss these people when I walk the gentrified Art Ghetto that is now the East Village their memories and the memory of a time when the streets of the lower east side were ruled by anarchy, punk and insane late night mischief!

Recently, Donna set up a website about No Thanks, and she has made available two CDs. The first is a really good live show from CBGB in 1983 and the other being the bands 1982 Demo! With their only output at the time being this 7″, I’m glad to see there was some additional material that finally, more than 20 years later, is seeing the light of day.

There was 1000 of these 7″s made officially by Dead Space Records. They have a black label and large spindle hole. After that, the label released an unknown amount in Italy with a red label and a small hole, which went against the agreement they had with the band.

As always, if you have any additional information please get in touch.

Listen to “Poseur” from the record