The many flavors of: Minor Threat – Out of Step

One of the finest hardcore records ever was the Minor Threat – Out of Step LP. It is easily in my top 10 hardcore records of all time and has enjoyed regular play over here since I bought the record some 20 years ago (holy shit I’m getting old!). To this day it is a steady seller for Dischord Records and in fact is still in print on vinyl! Over the years, it got a couple of face lifts, and thus there was quite a few variations.

The first pressing had no stripe on the front cover, and a plain black cover. There was 3500 of these made and it sold very quickly.

It was then remastered for the second pressing. The back cover was changed to gray and it contained photos of the band members and the track listing. There was 5000 of these made.

The third pressing added a blue stripe and a price to the front cover, and on the back they removed the photos and just had a track list inside a box on a black background.

At this time there was also a UK pressing which had a red stripe, and the price in Pounds Sterling on the front cover,

as well as a German pressing with a green stripe, the price in DM, and the back cover had German song titles (with English translation right underneath them).

The fourth pressing had the same price as the third, but the stripe color was changed to blue-green.

Around December of 2007, it was pressed on gray/white vinyl. There was 2000 made 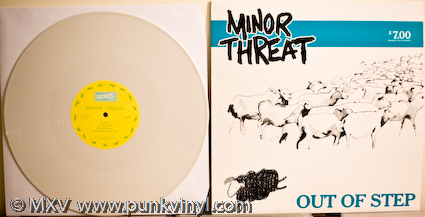 Finally, a good portion of the test pressings had a silk-screened sleeve. This is perhaps the most sought after Dischord collectible.

After the fourth pressing, the record kept getting re-pressed with the only difference being the price on the cover increased. After $3.50, it went up to $5, and then to whatever else they increased it to, I think 7 or 8 (perhaps both). You can still buy a current pressing today straight from Dischord Records, a label that has not shown any signs of giving up on vinyl, for which they should be commended.

UPDATE: Due to a couple of questions, I have added the additional information:

The first pressing insert was just an 8.5″x11″ sheet containing the lyrics and no photos.

The second, third, German, and UK pressings had yellow labels that look like this.

The second pressing insert started the “poster” style insert but was on flat, plain paper.

The third pressing (including the foreign pressings), and all subsequent pressings came with the same insert, but printed on glossy paper and is of much higher quality.

On the fourth pressing, the greenish ink on the lables are much brighter. I can only assume that the pressings that followed have them too but I don’t have any to reference.

So there you have it, the many flavors of one of the finest hardcore records of all time and a sure classic.