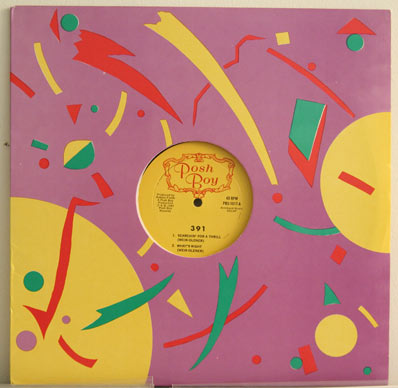 Selections from The Punk Vault [391]

Recently on the KBD group, someone mentioned the band 391 and it made me remember, “oh yeah, I have that record”. I bought this record a long time ago when I found it at a store and I had never heard of the band, or had ever seen the thing before that day. I bought it simply because it was on Posh Boy Records and that was (and still is) a label I collect. I brought it home, played it and thought “hey that’s not bad at all” and filed it away where I had completely forgotten about it for a long time. That scenario happens far more than you probably realize but it is inevitable that it would happen when you have as many records as I do. In fact the other day while pulling records to play on the radio show, I stumbled across a few things I forgot I owned. I do keep a detailed list of everything I have on the computer, but as the numbers grow, I find it harder to personally remember it all.

Not knowing anything about this mystery record and band other than what label it was on, I went straight to the source for some information. I asked Robbie Fields, the Posh Boy, what the story was with it and he was quite happy to share the story with me for this feature.

391 was an essential part of the learning curve for the new Posh Boy label.

The background : I had been a huge fan of The Nuns in 1977. In fact, the Nuns were arguably the first “punk” group I saw, headlining the Whiskey with The Dickies in late ’77. This was the Alejandro Escovedo era Nuns that played as a group, with three lead singers. I had hung out with singer Jeff Olener at the Masque after that first Whiskey show and become friendly, albeit in a fan worship kind of way.

Later, I had seen Jeff after they opened for The Sex Pistols at Winterland in San Francisco. The band that I managed, F Word!, were lucky to be the opening act several times for The Nuns at S.F.’s Mabuhay Gardens. Lucky, as The Nuns were the biggest local draw in San Francisco. at this time and all groups at the Mabuhay were on a fixed percentage of the door and an opening act’s 5% was a big pay day, so long as it was The Nuns or The Avengers headlining.

So it must have been sometime in 1979 that I was contacted out of the blue by Jeff Olener.

The Nuns were no more. Rumor had it that they were being signed to a huge deal by Columbia but other than an appalling single on 415 Records, nothing had seen the light of day. The first fashion directed wave of punk had been and crashed. Even my Beach Blvd album seemed to have spent itself very quickly over its first summer of 1979. It was time to move on, or so it seemed.

Jeff Olener had put together a rock band. Not punk, not metal, not power pop, a rock band.

He had some good players backing him up, a singer who talked who his way through a song, most magnificently in the Nuns’ paean “Suicide Child”. From the ashes of The Nuns came drummer, Jeff Raphael. On guitar was Jackson Weir III, who could have doubled for Jimmy Woods in The Onion Field. Finally on bass was the taciturn Danny Machine.

Up to this point, I had had very little studio experience. We had recorded the Beach Blvd. album at Media Art in Hermosa Beach. I believe the offer to use Paradise Studio came ahead of being offered time by Denny Cordell at his Shelter Studio in Hollywood which was used by Red Cross.

The contrast between Media Art and Paradise could not have been greater. Media Art felt like there were band aids holding the equipment together and the engineers were keen but not used to recording masters. It was essentially a demo studio.

Paradise was owned by legendary musician and songwriter Leon Russell and was, to say the least, plush. It was undoubtedly used as a legitimate tax shelter and Leon Russell had poured heaps of money into the compound in North Hollywood.

I recollect there being a tour bus parked semi-permanently there.

For me it was an exhilarating experience to book time there. In back of where I sat producing was Leon Russell’s Grammy citation for song of the year for “This Masquerade”. This was heavy. The engineer we were using was on Leon’s staff as a maintenance engineer and his name was Jim Mankey. Jim and his brother Earle had been in one of the earliest version of Sparks that had played my college ball in London in 1973. Earle was making a name for himself as a new wave/power pop producer. Most stunning of all was Jim’s girlfriend, then working as the studio booker: Johnette Napolitano. Yes, the Johnette Napolitano.

391 did not need the plush surroundings of Paradise to put on airs of being rock stars. The two Jeffs, Olener and Raphael had played big dates with The Nuns and spent months recording unheard demos for Columbia. The drummer was the brother of the bass player in arena rock band Journey. The guitarist, Jackson Weir III was an axe legend in his own mind.

The only problem was that they were too punk to be taken seriously by metal fans and far, far too cock rock to be granted leave by the newly developing punk audience. Jeff Olener had put together a great band for a different kind of lead singer.

But at the time, we were hopeful that we could get something on the radio and airplay would cover the cracks. It was not to be. But there was a huge payoff for Posh Boy… Jeff Olener had seen that I could deliver on promises made and early the next year in 1980, after persuading the other 2 former lead singers of The Nuns Detrick and Jennifer Miro to reform the group, it was Posh Boy that was offered the opportunity to record the studio album they had never quite made during their heyday.

Jackson Weir III played briefly with Rik L Rik after Rik’s Negative Trend days. Apparently there was a famous fight between Jackson and Will Shatter during the Flipper era. I am sure Jackson must have been devastated that success always passed him by whilst seemingly hopeless musicians established legends for themselves.

Raf – Jeff Raphael – played on and off with The Nuns until Jennifer Miro and Jeff Olener moved to New York in the 1990’s. I never heard from either Brett Valory nor Danny Machine again.

Thanks to Robbie Fields for sharing the story of this mystery band (well they were at least a mystery to me for a long time)!

Listen to “The Kids Gonna Do It” from the record.