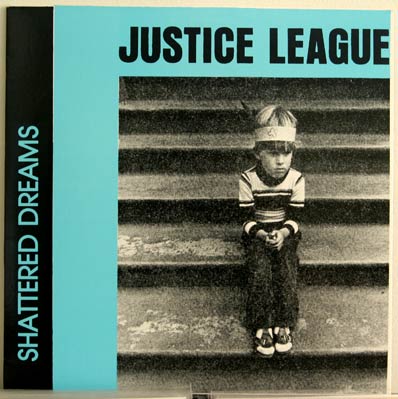 I can’t quite remember where I first heard Justice League. It was back in high school in the 1980s and it was likely either via a fanzine like Maximumrocknroll, or I bought it simply because I liked the name and they were in the Toxic Shock catalog (which is where I purchased their first 7″). Regardless, I thought they were a pretty good band and I ended up buying all their records, though few in number.

It was always in the back of my mind to do a little feature on them, but I didn’t really know much about the band’s history. As fate would have it, one of the members, Marc M, is one of my fellow daghouse brothers. I must have completely blanked on the fact that he was in the band in the past, or wasn’t paying attention, but it was when he posted a link to the myspace page he set up for Justice League that the light bulb went off in my head and I asked him for some history. He kindly obliged.

Justice League was a Pomona, CA based band that existed from 1983-1988. We released a 7″ EP, a 12″ LP, a 12″ EP, as well as a few compilation tracks. We played over a hundred shows, both locally and nationwide, with such bands as Social Distortion, Youth of Today, 7 Seconds, Uniform Choice, The Vandals, MDC, Crippled Youth, Gang Green, Dr. Know, NOFX, and more.

The Shattered Dreams era:
Around the beginning of ’86 Jon Roa (Think or Sink vocalist) quit the band. I don’t think any of us were too upset by his decision. He was replaced by our friend from Orange County, Casey Jones. While only playing 2 shows (Reno, with The Brigade & Long Beach with Scared Straight, Dr. Know, and Blast) with the band, Casey managed to do the vocals on our only full-length LP, Shattered Dreams. We rewrote most of Jon’s lyrics for the album (mainly because we didn’t know them). My first two attempts at lyrics appear here, “Disarray” and “Down Again”. This was also where I discovered that I could sing OK when I did backing vocals on “Falling Apart”.

We did the album at Radio Tokyo in Venice, CA with Ethan James engineering. Skip had seen an “ad” for the studio on a Minutemen album. The LP features a pretty wide mix of styles, as we were starting to outgrow our Minor Threat/Stalag 13/DYS influences and were listening to bands like Husker Du, Squirrelbait, Rites of Spring, and even bands like Bauhaus & The Smiths. (Note: Ryan blatantly stole Bauhaus lyrics for “In The Cold”, but none of us noticed until years later!)

When we finished recording the album the next logical step was a summer tour. Skip, Fred and I had just finished our first year of college, and Ryan & Casey had just graduated from high school so it was time to hit the road again. With a little help from Bob Durkee, I booked a six week trek across the U.S. A few weeks before the tour, Casey decided he didn’t want to go. Even he admits his reasons (not wanting to leave his girlfriend or his job) were dumb. So that was it for Casey.

Our first post-Casey show was one of the best parties we ever played. It was in Mark Duran’s backyard. He had a huge skate ramp that he built and people were skating it in the afternoon,
and then we turned it into a stage for that night. POW played before us and then we fumbled our way through a set, not knowing most of the lyrics and trying to sing ourselves for the first time. Bill Tuck (Pillsbury Hardcore) jumped up and sang Aerosmith’s “Sweet Emotion” with us. The cops eventually showed after a while, but I’m sure we were out of songs we could sing by that time anyway.

We toyed briefly with the idea of asking Jon to do the tour but decided against it. We divided up the songs and decided to sing them ourselves. We pooled our money and bought a cheap van and hit the road with a couple boxes of 7″s and some shirts that Bob fronted us. When we got home Skip was replaced by Chris Bratton on drums, and in February of ’87 the Shattered Dreams LP was finally released.

Many thanks to Marc for the story. The band has a page on myspace where you can learn a little more and hear a few songs. There is also a CD reissue of the old material that I wasn’t aware of until recently, and someday when I am back in the working world and can afford such things, I plan to get someday for easy car listening.

Listen to “In Love with an Idea” from the record