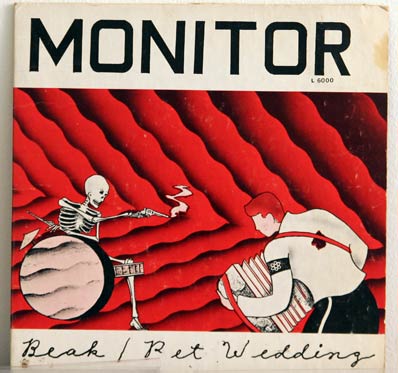 Selections from The Punk Vault [Monitor]

Monitor – Beak/Pet Wedding 7″
(1979 World Imitation Records)
My introduction to Monitor happened in a rather odd way. I was at a record convention and this one dealer I was regularly buying a ton of records from pulls out this album from a band called Monitor and said, “hey, I know you like the Meat Puppets and they have a song on here”. At first I thought it was a compilation but Monitor was the band’s name and it was their album, yet the Meat Puppets had a song on it. I don’t know of any other example of a band releasing a full-length record of their own, yet having another band put a song on it. Aside from the fact that it was on World Imitation Records, who put out the first Meat Puppets 7″, I didn’t quite know the reason behind it, and really to this day it still doesn’t make any sense.

It turned out that World Imitation was the label that Monitor started, and aside from that LP, there was a 7″ that came out earlier. I was lucky to find a copy at a used record store many years ago for a couple bucks. I didn’t know much about Monitor except they were an art band and put out these two records as well as a Meat Puppets single, and truth be told, that’s really all I still know except one of the guys ended up in The Romans, and Monitor put out a record under the name The Tikis too which was a different sounding band but featured many of the same members.

After doing some digging around on the internet, I came across a little history on Monitor written by a fellow named Antonio Beecroft.

In 1978, thrift shop archeology was still a fledgling science, and computers had yet to conquer the world. Between earthquakes and smog alerts, one could buy the pamphlets of a shadowy organization called World Imitation at boutiques along the Melrose Blvd. strip (then a block long). Drawing inspiration from certain antique notions of the future, and with titles such as Surf Rules, Tesla-Rama, Hula Dance and Computer Buddy, they prefigured the obsessions of today’s retrograde youth.

In the space of those three years, with the assistance of Devo’s master sound sculptor Ed Barger, Monitor recorded two discs (45 and LP). The Monitor project occupied the sliver of available space between the rote rebellion of Punk (the folk art of L.A.) and the determined consumer ugliness of New Wave without a nod of recognition to either. Each piece was lovingly chiseled from the void and rigorously orchestrated, drawing inspiration from spiritual forebears as diverse as Martin Denny and Orlando Gibbons. Following the 1978 single, Beak/Pet Wedding, drummer Rankin bowed out and was succeeded by primitive percussion master Keith Mitchell on their eponymous self-produced LP. These facts are known: the rest we must infer from smoke signals and rumors.

The members of Monitor on this recording were Steve Thomsen, Michael Uhlenkott, Laurie O’Connell, and Jeff Rankin. Boyd Rice also appeared on this doing vocal and pinwheel. To the best of my knowledge, none of Monitor’s recordings have ever been reissued on any format. Some members of the band had some involvement with this Museum.

As always if you have any additional information or were in Monitor, please get in touch.

Listen to “Beak” from the record