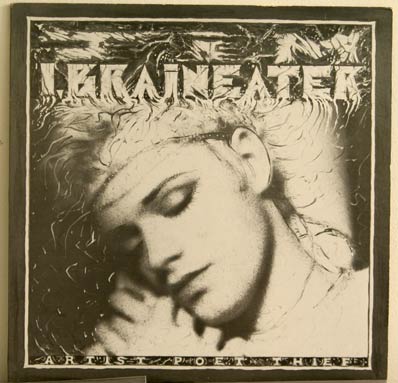 Selections from The Punk Vault [I Braineater]

Being more than a huge Skinny Puppy fan, I would take notice of such things as the people who were doing their artwork and all kinds of other things related to the band. One such person who did the covers to Too Dark Park and Last Rights was a man named Jim Cummins. His artwork was pretty spectacular on those records and I’d soon discover he wasn’t just an artist, but he played in a punk rock band earlier.

His band started as The Braineaters and were based in Canada. They put out one 7″ and featured members from K-Tels and Young Canadians. After this record came out, the other guys split and Jim changed the name to I Braineater and went on to put out a small handful of records over the next few years. I’m not sure, but since the beginning it may have just been Jim that was the band and just got some friends to help him out. After the name change, the music branched away from straight forward punk rock and got a little more experimental and electronic.

Where are they now? Jim is still out there doing various forms of artwork. I read somewhere that in 2004 he did a show as I Braineater. As far as I know, with the exception of The Braineaters 7″ that was reissued in the 1990s on Super Electro (a label started by someone in Mudhoney, and that I think now is long gone), none of this material has been reissued anywhere.

As always, if you were in I Braineater or have some additional information, please get in touch.

Listen to “Edge” from the record