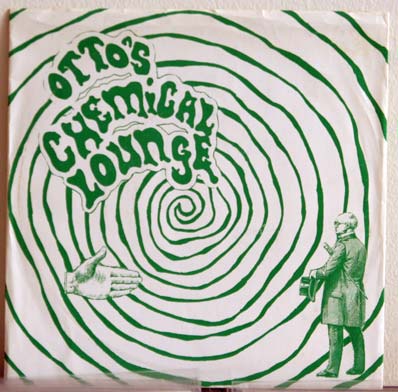 I first heard about Otto’s Chemical Lounge from an ad or a review in an issue of Raveup Fanzine, which was a fanzine Anthony Illarde of Rights of the Accused put out back when I was a young lad just discovering punk and hardcore music. It would be a few years after seeing this though, before I finally would come across a copy of this record and procure one for The Vault, and this was back when The Vault was still pretty small in size.

I don’t know much of the history of the band, but I’ll share what I’ve found. They were from Minneapolis, MN and their first 7″ came out on Reflex Records, the label founded by Husker Du. Tom Hazelmeyer and Paul Osby were two of the founding members after their first band, Todlachen, disbanded. Todlachen recorded some songs that were supposed to be released as a 7″ on Reflex Records, but it never came to pass. Allegedly Bob Mould still has the tapes. Bob, if you read this, you should release this thing before its lost forever, or at least pass ’em on to me and perhaps I’d want to do it!

After this, Tom Hazelmeyer left the band and would later start a new band, Halo of Flies, which garnered some success in the late 1980s and early 1990s, and also started Amphetamine Reptile Records, who put out some damn fine noise rock records back then, and was probably most recognized for bringing the world the once great Helmet. Tom was replaced by Al Schroeter and Otto’s Chemical Lounge released what became their final record in 1985, Spillover, which was an album on Homestead Records.

After this, John Anglim was out and replaced by Mike Johnson. In 1986 they contributed a cut to Big Hits Of Mid-America Volume Four on Twin/Tone Records. I don’t think the band lasted much longer after this and they all went their separate ways. John would later play in Bludgeon (with Tom Hazelmeyer) and Halo of Flies. Mike Johnson played with Badfinger and Brutus. Dale T. Nelson was in Hearsemen, Sheepherders and The Little Ones. Paul Osby went on to form the Blue Hippos.

As always, if you have any additional information or were in Otto’s Chemical Lounge, please get in touch.

Listen to “Trip with Me” from the record