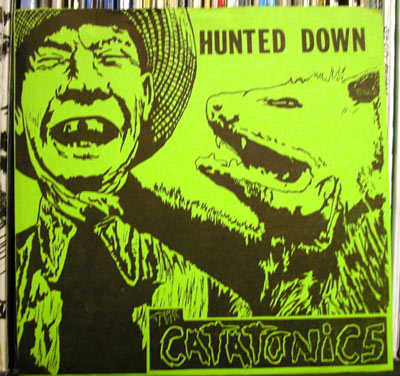 Selections from The Punk Vault [The Catatonics]

The Catatonics were among the many standouts on the Flipside Vinyl Fanzine Volume Two compilation. Their song, “Descending in E” went on more mix tapes of mine than I could possibly remember. I liked it so much that I wanted to hear more from the band and learn more about them. I found out they had a 7″ which I sought out and procured for the then-small vault. Sadly I never did get to learn much about them other than they were from the New York area and with the acquisition of said 7″, I now owned their entire recorded output.

Recently, a former member of The Catatonics found this website and the past entry where I listed band members I was seeking. His name is Joe Miller and he was kind enough to share a little band history for us.

I was a living in Homer, New York in 1981 when I met Belvy K. and his younger brother Jason. There weren’t many punks in Upstate New York at that time so you tended to introduce yourself to anyone who looked outside the norm. We started jamming at my parents house and wrote and recorded there during the summer of 1981 under the name Frontal Lobotomy. I moved to Florida for a year, but stayed in touch with Belvy, who is a kick ass drummer. Eventually his dad said I could move back to NY and live with them in Camillus, a small suburb outside of Syracuse. I did and we started playing music together again, this time as The Catatonics.

Jason quit the band to concentrate on Hockey. We replaced him with Louie Arrowhead, who also played guitar and sang. We recorded our first demo with Louie, and Belvy’s dad produced it. We played our first gigs in 1983 at a place called the Carousel Club in Syracuse. Those first gigs got us a lot of attention and some good write ups in the Syracuse “New Times”. We didn’t have any other local Punk Rock bands to play gigs with, so we started putting shows together with touring punk bands. Then we wanted all ages to be able to see us so we started renting halls and galleries to put on our shows.

In 1984 we said goodbye to Louie and added Farmer Brown on bass. Farmer would eventually play second guitar and we added Jeff from “Buster Hymen” on bass. We recorded the Hunted Down EP with this line up. We continued putting on shows ( Verbal Abuse, Youth Brigade, 7 Seconds, etc..) and eventually found a place of our own which we called, The Rabid Monkey Club. The Rabid Monkey closed, Belvy joined 7 Seconds, I started playing drums for Stillborn, and the Catatonics faded into obscurity. Belvy would later join the UK Subs, form the band, Libertine and currently sings for Madison Strays. Farmer moved to California and joined a group called Fungus from Palo Alto, where he still lives and races motorcycles. I also moved to California in 1984 and joined Fang playing bass, and in 1988 I started playing drums in Boom and the Legion of Doom under the name “Pork Butt”. I am currently playing bass for The Demonics and am fuckin STOKED, check us out at thedemonics.com

There was 500 of these 7″s made and sadly the music was never reissued. The Flipside comps were at one time reissued on a double CD, but sadly that too has been out of print for about a decade now.

Thanks a lot to Joe for the band history!

Listen to “Never Again” from the record