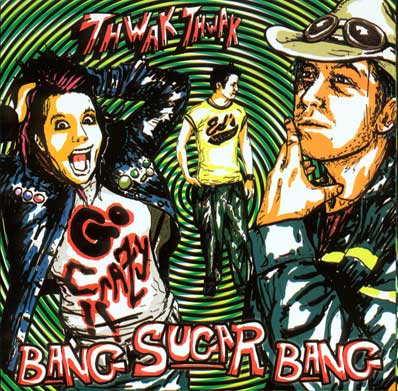 Though this is their second release, it is the first I’ve heard of this Southern California band. Upon reading the bio that was included with my CD, three things caught my eye.

That was enough for me to want to see what these guys were all about seeing as they surrounded themselves with good company. I’m happy to report the CD contained inside was pleasing to the ears. This record was originally available for a limited time on the band’s own label, but now is available to the masses courtesy of their new home in SOS Records.

Bang Sugar Bang is a three-piece outfit consisting of two gentlemen, and one fine lady. Their music is in the power-pop/punk vein. There is hints of X (especially because of the male/female vocal dynamic), Cheap Trick, and some 70’s punk bands, along with some modern pop/punk. The music is very upbeat and catchy, with really good harmonies. The lyrics are often times sarcastic and in good fun as evidenced in such songs as “Major Label Interest”, and “The Machine Gun Song”, Other songs such as “Kill the Radio” are so catchy that I guarantee it is going to get stuck in your head and you’ll be singing it in the shower. The two different vocals really compliment each other well and the music had a just the right amount of punch to it so as not to come off as wimpy, yet it is still pretty accessible.

The music really would lend itself well for a night out drinking with your friends and having fun, and live that is just the vibe I got from the band’s really excellent performance. You’d do well to give them a chance if you are looking for something to listen to, or if they come to your town, I guarantee it having witnessed it myself, that they are a fun band to see play.