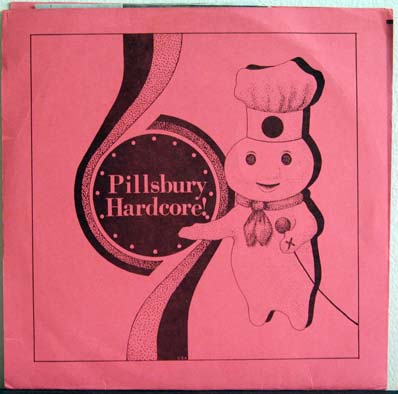 I can’t recall how I came to hear of Pillsbury Hardcore, it was either from a compilation or it was just by reading the Toxic Shock Records catalog and checking them out just for their name. Either way, I do remember buying my first copy of that EP from Toxic Shock, which at the time was the best punk mailorder around. In their short time together, Pillsbury Hardcore only managed to put out a pair of EP’s, this one, and one that came in the Budget Ranch Box put out by Toxic Shock a long time ago.

Pillsbury Hardcore formed in the summer of 1984 out the ashes of Disinfection (my first band) & DDT (Joel Connell’s first band). The band was named by a friend, Pat Kwee, after another pal of ours (Dean Riley Stokes, who on the first gig was our guitar player) who resembled the Pillsbury Doughboy and was feverishly into hardcore, hence Pillsbury Hardcore. Our first show was a party where everybody was getting drunk, in retaliation to what we were experiencing, we borrowed instruments and called ourselves “The Straight Edge Facists/Pillsbury Hardcore”. The set consisted of a improv jams with lyrics made up on the spot and basically annoyed all the party goers (this was basically the band’s mantra until the end). This would continue for a few more parties and into our first bonafide show, which featured Scab on vox, Bob Durkee on guitar, Jon Roa on bass, and Joel Connell on drums. This lineup lasted one show and Shawn Connell was brought in on bass duties which also lasted one show when Shawn was moved to guitar and Eric Wood on bass. This lineup lasted for nearly two years and produced a demo (Poppin Fresh), a live tape (Live In 85), a appearance on Flipside Video, two 7″ records(In A Straight Edge Limbo & Horror Snores), and two compilation appearances (End the War Zone & Empty Skulls 2). Sadly the group disbanded in the summer of 1986 ( I basically wanted to get more serious and change the name, but other band members wanted to continue with what we had) After a brief break, the band minus Scab, reformed. Which produced a failed attempt at an album (which Scab contributed vocals to). The album material was not up to snuff so plans to release the L.P. were subsequently scrapped.
The band continued for another year which produced some of the tightest material the band ever produced and was the groundwork for the oncoming “Power Violence” movement. After a short U.S. tour the band called it a day.
Other members went on to form Pissed Happy Children, Shoeface, Process, End to End, & of course Man is the Bastard.

This EP came out on black, orange, and green vinyls. I actually need an orange vinyl copy if anyone has one for trade.

Thanks a lot to Bill for sharing the history of his band with me!

Listen to “Wanna Check out My Record Collection” from the record (right click it and save!)