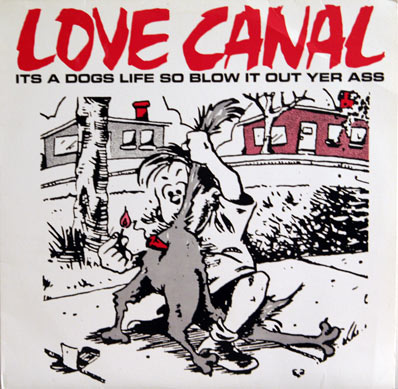 I forget which compilation appearance it was that I first heard Love Canal on. It was either Clockwork Orange County, Covers, or the Half Skull (Insane Industries) compilation, regardless of which it was, I thought they were a pretty cool band and eventually (many years later) I got around to picking up their LP. Recently I stumbled across a comment on another blog from a former band member so I dropped him a line and asked if he would be so kind as to share a little Love Canal history for me. His name is Kerry and he happily obliged.

From Huntington Beach, CA, Love canal is Arab-guitar, Kerry-vocals, Louie-bass, and Bobby-drums. Within a month after Kerry’s last show with The Skoundrelz in early 1983,
Love Canal was up and running and playing shows thanks to the connections made during The Skoundrelz years and the fact that Arab roadied for T.S.O.L., The Vandals and what seemed like every other O.C. . band.

Shows came easily and by the summer of 1984 we were playing on the big Goldenvoice shows and posing naked on the cover of Flipside fanzine. Our first recorded effort was a five song demo tape called We Know Something, then came the Half Skull compilation EP put out by “O” with M.I.A., Decry and Basic Math. This was followed by two Mystic compilations; the Covers LP. and Clockwork Orange County. At this time we were playing shows with a substitute drummer, Eric Bakken, who was sitting in for Bobby while he was on vacation provided by the Huntington Beach police department. After Bobby’s return, we were offered a recording deal with National Trust Records. This resulted in this LP. After the release of the album, we played a series of shows ending with our last show in September of 1985, opening for the Dead Kennedys. After the band broke up, Arab went on to play with Arab and the Suburban Turbans and a short stint with Doggy Style/Doggy Rock. Kerry started a second version of Love Canal that only lasted a year and then formed Motherfist which broke up in 1998.

Fast forward to 2006 and Love Canal are releasing a collection CD on Grand Theft Audio records. It will contain the first demo, the LP. and all the compilation cuts. Rumors of live shows after the release are being quietly acknowledged, the first in over 20 years. Thanks to “The Punk Vault” and MXV for the interest .

Thanks Kerry for the band history! I for one look forward to the CD being released.

Listen to “Black Clouds” from the record (right click and save it bitches!)