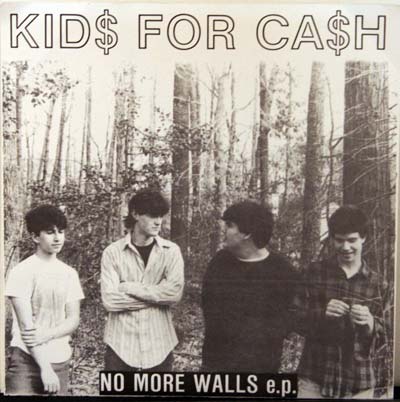 Selections from The Punk Vault [Kid$ for Ca$h]

I don’t recall how I heard about this band initilally, it was either a review in something like MRR or I simply bought this record in a stack of old punk vinyl in some big record acquisition. Regardless of where I got it, I thought it was a pretty good little EP. Sadly the band never stuck around long enough to release anything else and their story was a mystery to me. Recently a former band member, Dan Cook, got in touch with me and sent over this brief bio.

Kids for Cash was formed in 1984 by guitarist Sohrab Habibion and vocalist Frank Charron, quickly adding Dan Cook on bass and a steady succession of drummers, eventually settling on Tony Farfan. Three of the four band members were high school students at Lake Braddock in Burke, VA, a suburb of Washington, D.C., and the band’s outlook and music was heavily influenced by the mid-’80s D.C. scene.

The band released one cassette and one EP, the No More Walls 7″ on Habibion’s Town of Hardcore label, and played briefly around the D.C. area. They performed on multi-band bills with Embrace, Scream, Government Issue, Marginal Man and others, including Dain Bramage, which featured Dave Grohl on drums. Grohl filled in on drums with the band for two shows.

If anyone has a copy of the cassette and can make a copy for me, it would be much appreciated.

Thanks to Dan for the band info!