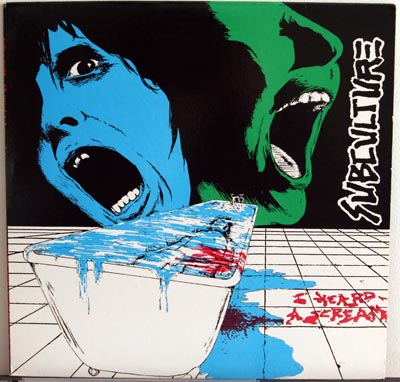 Selections from The Punk Vault [Subculture]

I can’t remember where I heard of Subculture from, it was either a fanzine or I simply bought their record because it was on Fartblossom Records (same label that Justice League were on). I actually had nearly forgotten I even owned this record until someone on the daghouse asked me if I planned on doing a feature on this record. It was through the luck of one of them playing in a band currently with one of the members of the band that I was able to get in touch with Kevin Collins (singer) and get the story of Subculture. It was co-written by Kevin and Matt Smart Ass (guitar).

Subculture was invented in 1983 by Chris Phillips and Matt Smith. They didn’t know any other punk rock people in Winston-Salem at that time so needless to say they were a duo. Matt already had a guitar and could play a few Chuck Berry songs. Chris became the drummer because he couldn’t get the words to “Johnny B Goode” right. They called the band Two Average White Guys With Big Gonads, or T.A.W.G.W.B.G for short.

Matt Started writing songs because it was easier than learning other people’s. He didn’t know anything about politics and felt that it would be obnoxious for a 14 year-old to sing about Reagan era America so he chose the only topic he thought he new anything about: girls. This was a bit unusual for a punk band at the time but they didn’t know any better. Chris met Bill Huthchins in early 1984. Bill had a bass guitar and could play pretty well so he became the bass player. It was Bill who came up the name Subculture. He saw it spray-painted on a wall in The Who’s movie, The Kids are Alright. In late 1984, Matt met a punk rock guy named Clint Buss at school. Clint played guitar and dressed real punk. Clint joined the band.

They played at some parties in Winston-Salem and even played in Simon Bob Sinister’s house in Durham. Simon Bob later sang in The Ugly Americans and much later in C.O.C. Clint’s dad drove them to the party. The punk people in Durham thought it was neat. Matt was singing and playing guitar at the same time. He found this to be challenging so they decided to get a singer who could jump around and scream. Matt’s voice was lazy and nasally sounding. They thought girls would like them better if they had a real singer. Kevin Collins was perfect. He had red hair like Chris, and he wore glasses. It turned out that his voice sounded really good when he screamed. He could jump pretty high too.

Clint left the band after a few months but they continued as a four piece. They recorded a demo in Kevin’s basement and called it We Like Girls because that’s what the songs were about. They played a lot of shows in Raleigh and sold their tapes to people. They sold the most at a show in Durham at a place called the St. Joseph’s Cultural Center. It was in the ghetto and after the show Mike Dean and Reed Mullin got stabbed. Don’t worry, they were OK.

They all got girlfriends like they had originally set out to. Bill spent too much time with his. This was unacceptable to the band so they kicked him out. Clint joined up again on bass. In the Summer of 1985 they recorded their first record, I Heard a Scream. Reed Mullin of No Core records and C.O.C. was highly instrumental in the project. He arranged for the record to be released in conjunction with Bob Durkee of Fartblossom Records in Pomona CA.

In 1986 Ed Marshall and Clint Buss were replaced by Fred Hutchinson on guitar and Jeff Floyd on bass. Phil Swisher, a future C.O.C bassist, was originally going to fill the guitar spot, but he was unexpectedly dropped on his head in a fight with a 300 pound homosexual at the Brewery in Raleigh. It’s not that I’m being homophobic, it’s a simple fact, it was a 300 pound homosexual. His name was Larry Lube. Since Phil was bald-headed it gave him a concussion. When Phil recovered he decided that Subculture wasn’t really the thing for him at the time, even though they had nothing to do with him being dropped on his head. Phil recommended Fred to do the gig instead. Fred suggested his friend Jeff to take Clint’s place.

They did their first tour of the Midwest and East Coast that summer with the horrible NOFX. They’re not really that horrible now, but at the time Subculture were the greatest punk rock band in the world. Everyone else was pretty horrible in comparison. They recorded a second record in 1987 but it never came out. The concept of shopping around for a label eluded the band at that time.
They toured the US and Canada in 1987 with NOFX. This was the last tour Subculture did. Matt quit the band in Green Bay after a show at a boxing ring, The band finished the tour without him.

In 1988 Fat Mike called Matt to see if Subculture wanted to go to Europe that summer. Matt told him he was out of his fucking mind and that there was no future in it. Fat Mike thought there was a future in it. One of them was right.

To which I will add a few memories that stand out …

Many fun days of skateboarding around W-S wherever we could find, mostly at an abandoned skate park that I remember my dad taking me to as a little kid, but closed and was left to rot. This was as close to heaven as we could imagine. Eventually filled in with sand.

Getting huge air on Chris Phillips’s rope swing. This thing was on the side of a steep hill and we’d swing in a big circle around the tree, first one way then the other. At the point where the hill dropped off you’d be ten or twelve feet up. Chris would do all these amazing tricks, hanging upside down and spinning.

Woody and Reed of C.O.C. joining all of us on backing vox when we recorded the LP and changing the lyric from “sadness” to “Sabbath”.

Where are they now? Most of us are married and have kids. Matt played in the cow punk band The Johnsons and now runs the county animal shelter. Chris played in the Squirrel Nut Zippers, Grover, Rubbermaid, and Rid of Dailys. Kevin played in Days Of…, Erectus Monotone, and currently sings for Double Negative. I heard that Ed Marshall is a farmer and graphic artist. Fred played in Boil, Husbians, Pigfucker, and currently Fran Hammer. Jeff Floyd played in Kudzu Ganja and currently in Semi-Pro.

Many Thanks to Kevin and Matt for taking the time to put that together! For record nerds, it should be noted that this album came on both green and black vinyl.

UPDATE: Fred from Subculture chimed in with the following…

As for Subculture, you guys kidnapped me from bumfuck wake forest and took me to winston for band practice. I was washing dishes at the time, and I’m not sure that they ever got finished. There are lots of tour stories, like the motorcyclist with a bone sticking out of his leg and “yo muthafucka i got your momma wrapped up in a bag, boy. We disbanded because we hated each other that week and I was too metal or D [Chris] wasn’t metal enough and because punks can’t stay punks for long and get along. Or something. Maybe we weren’t making enough money.

Listen to “Sadness” from the record (right click it and save!)

As an added bonus, Kevin sent me the unreleased second demo!

Listen to “Triangle” from the demo.