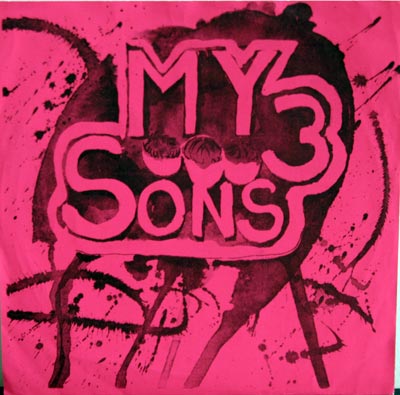 Selections from The Punk Vault [My 3 Sons]

I first heard My 3 Sons on the New Jersey’s Got It compilation on the long defunct, Buy Our Records. I had a big thing for New Jersey punk back then so I bought everything I could find on that label and then some. If it was from NJ, I’d buy it just because the state had a good track record for punk rock in my eyes. That line of thinking of course led me to purchasing this 7″, the only one the band released in their short time together.

Recently I happened across one of the former members of the band, Joe Saggese, and he was kind enough to share some My 3 Sons history with me, which was much needed since the 7″ barely gave you any information except the name of the band and the names of the songs!

It was with deliberate intent that there was no information on this band from its formation. We just wanted it to be known that there was a punk band from NJ called My 3 Sons and that they left a few recordings and the listener either appreciated it or didn’t. We came to agreement very early on that the band would not be about any one of us but rather represent the NJ punk scene of 1982, which we believed very strongly in and still do till this day.

With the passing of almost 25 years since the band from Union, NJ first played together, it’s time to reveal some facts about My 3 Sons. My 3 Sons were founded at the end of the summer of 1982. The original band line-up is as follows:

Although My 3 Sons played to the hardcore crowd, we were anything but. The band was very influenced by a few different genres of music such as the San Francisco bands on the Subterranean record label, Noise/Art/Industrial bands of the early 1980s & the heavy psychedelic bands from the 1960s featured on the Pebbles compilation albums. All of these different likes in music lead My 3 Sons into having two distinct and confusing styles.

After buying his Roland Synthesizer, Chris Frieri is credited with the noise songs such as “In The Beginning” (B-side to “Starving Artist”) and “Happy Valley” (never released). Whereas I wrote the Acid Punk sounding songs like “Starving Artist” & People Who Bleed” (New Jerseys Got It compilation). There were a few songs where we combined both noise and acid such as “Untitled 13” (New Jerseys Got It compilation) and “The UFO Song” (never released).

We selected “Starving Artist” and “In The Beginning” for our first and only single because at the time these two songs best represented the bands attitude. Where other bands at the time played more of a politics of the day type songs, My 3 Sons were truly on the edge of the started Emo movement. The lyrics of these two songs and all the other songs deal with inner pain, self defeat and having no sense of self worth. The character in “Starving Artist” might be that anti-social artist who makes one masterpiece after another but cannot see past his own inadequacies. He might be that person who chooses to have no friends but fabricates an imaginary reason for his lonely lot in life. Then there was the extreme with “In The Beginning”, the story of a young man dealing with his inner thoughts after a female’s rejection and what goes on in his mind when he’s at a party and he leans against a wall watching the girl he loves being friendly with another man. Thoughts we all feel but never reveal to anyone.

Needless to say, the excitement of recording this single disappeared after we heard the actual 7″. The sound quality of this record was a big disappointment for us as a band and still haunts us today.

My 3 Sons played with most of the New Jersey bands found on the NJ compilation album at a host of venues up to the release of the single like Patrick’s and the Court Tavern in New Brunswick, NJ, The Union Recreation Center, A7 in NYC and The Dirt Club in Bloomfield, NJ.

If our single was a failure, our shows made up for it. Something always happened and we never knew what it was until it happened. Weather it was me throwing up in the middle of a song or getting beat up by a patriot during a song. Chris would do his Jimmy Page impersonation with a violin bow, or Scott passing out during a gig while trying to play drums while wearing a gas mask. Most of the My 3 Sons shows ended in some type of riot or were removed from the stage by the club owner.

My 3 Sons never officially broke up. The last gig was during the summer of 1985 at Johnny Dirt’s Slime Fest in Newark NJ. We just never called each other again 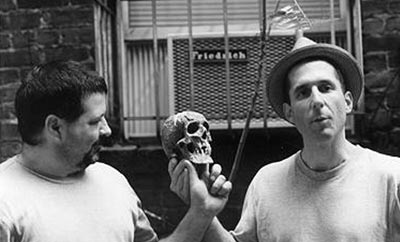 A bit of record nerd trivia: This 7″ came with either a pink sleeve (as shown) or a green sleeve.

Many thanks to Joe for the great history of the band!

Listen to “Starving Artist” from the record (right click it and save!)