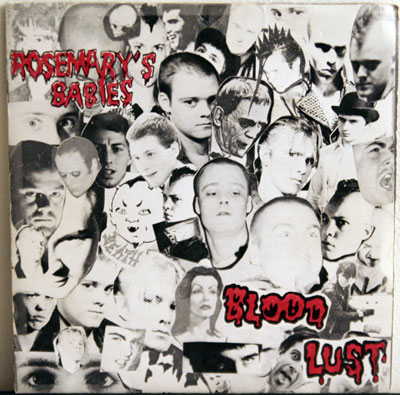 In the mid 1980’s, my obsession with The Misfits and Samhain led me to hear of this rather obscure hardcore band from New Jersey called Rosemary’s Babies. It turned out that it was Eerie Von’s band before he joined Samhain. They put one just one 7″ and I was able to get one in a trade from John the Loaf along with the Mourning Noise 7″ which featured another Samhain alum in Steve Zing but that’s a story for another day. The music was pretty much par for the course hardcore for its time but there was something about the packaging and everything that made it stand out to me among a lot of the other hardcore 7″s I was acquiring at the time. The fact it had the Samhain tie-in certainly added to the appeal for me at the time as well.

I never read anything about the band in any fanzines and there wasn’t a whole lot to be found on the web the last time I tried to find any information, so luckily I was able to track down one of the members, Bob, who told me Eerie Von would be the guy to ask since his memory is a whole lot better. So I shot a few questions Eerie’s way and he was kind enough to respond.

I first asked him how he got into punk rock…

My sister, Doyle, and Bob from RB were all influential, in turning me onto it. The first Punk song I heard was Teenage Lobotomy by the Ramones. Then of course having the Misfits in your town was a big plus.

And how he met his future band-mates…

Bob, and Craig, were schoolmates, I met JR through another friend. He also lived in Lodi, but went to a private school in Clifton. He turned me onto Minor Threat, and the Bad Brains.

Then the punk rock led to starting Rosemary’s Babies and who formed it?

It was just me, Bob, and Craig for like 6 months, learning how to play together, and coming up with our own songs. We tried out a few singers, but I always wanted JR, cause he was so loud, and aggressive, and crazy, but he never really wanted to be in a band, I don’t think. We did a demo ( Keep Out of the Hands of Children ) with this guy I worked with, then eventually got JR to join.

This of course leads to the 7″ which is the feature here.

You had to make a record if you wanted to get shows and reach people, so I worked nights at a chemical plant, wrote songs, and came up with the money. I don’t know how much Bob put in, or if he did at all, but Craig never had any money. It didn’t matter as long as it got done.
We pressed up 1,000 copies on red vinyl. Glenn (Danzig) helped me with the particulars, gave me all the numbers, told me who to talk to, took me to his printer, and then to the pressing plant he was using at the time, out on Long Island.

Did they have plans to do more records before breaking up?

Yeah there was always plans to do more records, I wanted to go on, and on, but after the 7″ came out, Bob lost interest and started missing rehearsals, Craig was always there, never missed one, I kept writing songs, and recorded stuff for a full album, but, Glenn wanted to do Samhain, so I gave up the project.

Did they ever play outside of New York/New Jersey?

We did some one off shows in Boston, and Philly.

What happened to everyone after the breakup?

Craig is still playing Punk rock, he’s in a band now, Bob is working on Ghastly Records, and I’ve lost touch with JR. I have a new project “Spidercider”, new CD coming out in a month or two, hope to put together a new band, and go back out on the road.

Sometime last year, Bob resurrected Ghastly Records and they reissued this 7″ along with tons of bonus tracks on a CD. It actually sounds a lot better than the original vinyl, and its not often you hear me make such a statement about a CD. You can get yourself one from the site or if you like to buy your songs online, they are available in the iTunes music store.

Eerie Von has a myspace page. Go on over and check out what he’s up to these days. He has some cool art prints for sale and I’m sure soon he’ll have new music up on there to check out.

Thanks a lot Eerie for the band history!

Listen to “Blood Lust” from the record