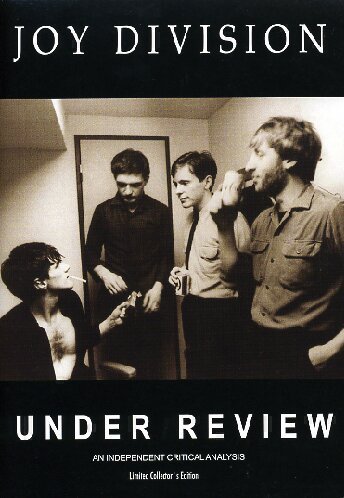 One of the more influential first wave of sort of post-punk bands, Joy Division, gets the documentary treatment in the Under Review series. Much like The Velvet Underground one, this focuses on not one record, but the entire career of the band and what happened in their wake.

The documentary starts out talking about the punk scene happening in the UK at the time and how one particular Sex Pistols gig influenced an entire crowd of people who ended up forming their own bands, many of which became rather successful. It was at this gig that three gentlemen decided to form a band and called themselves Warsaw. It wasn’t long before a name change to Joy Division happened and they were gigging and recording. The story is told through interviews with various music journalists and one of the co-authors of the Ian Curtis biography. They leave no stone uncovered, delving into everything including Curtis’ battle with epilepsy, his extra-marital affair and his depression and eventual suicide. There is video footage, live footage, interview footage, and TV appearance footage.

They do an extremely good job in educating the viewer about pretty much anything they’d want to know about Joy Division, and even give some in-depth analysis about the records and specific songs on them. I’ve only been a casual fan of the band and never did much research into their history and now I don’t have to, it has been done for me on this DVD.

The disc runs about 70 minutes long and the time seemed to go by quickly. Extra features are pretty sparse on the disc; there is just an audio interview with Ian Curtis that is extremely hard to hear but there is subtitles to help you follow it, there are biographies on the people who were featured in the documentary, and the “hardest trivia contest ever” feature in the Under Review series is also included here. If you are a fan of Joy Division and wanted to know more about them (which I did), you’ll definitely want to add this to your Xmas wish list.