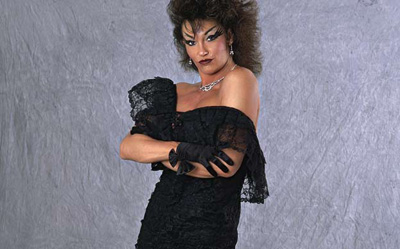 I used to occasionally write about wrestling on this site when something about one of the shows compelled me to do so. Lately wrestling has been so bad that I stopped writing about it except for the all too often times that a wrestler I enjoyed watching on TV in the past passes away.

Sherri Russell, better known to wrestling fans as “Sensational Sherri Martel” passed away a couple of days ago. The cause of death is unknown as I write this however I read this morning that it may be under suspicious circumstances. Sherri was 49.

Sherri did time in the WWF (now known as WWE) and WCW where she was one of the all time best and also one of the first female managers in wrestling. She played a great heel and helped catapult plenty of stars careers to new heights. She managed such people as Macho Man Randy Savage, Shawn Michaels and Harlem Heat among others. She was good on the mic and wasn’t afraid to get involved in matches and take bumps of her own either. A year ago she was inducted into the WWE hall of fame.

Rest in Peace “Scary Sherri”, I hope you are interfering in matches and distracting referees in the after-life.