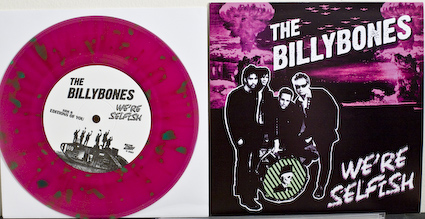 Billy Bones has been involved in punk rock for three decades now. He was the frontman for the legendary Skulls from Los Angeles back in the first wave of punk rock. After a couple years, The Skulls disbanded and many members sadly passed away. Nearly 25 years later, Billy reformed The Skulls with new members and put out a bunch of really enjoyable albums that not only didn’t tarnish the legacy of the original band but actually added to it, which is not an easy feat to pull off.

A couple years ago The Skulls disbanded and after a bit of down time Billy Bones has returned with his new outfit aptly named The Billybones. They pick up right where The Skulls left off and if you didn’t know better, you’d really think it was the same band. In fact I wonder why bother with the new name except for the fact that none of the members of The Skulls carry over to this new band.

The music is 1970’s influenced melodic punk rock. You can sing along to it but it has a real punch to the music and isn’t the least bit wimpy. The guitars are loud and a bit distorted and the beat is pretty straightforward which sets for a great backdrop for Billy’s trademark vocals.

This 7″ vinyl as three songs on it and comes in a glued, thick picture sleeve with an lyric sheet. It comes on colored vinyl and I’m pretty sure there was a couple of different colors pressed. The one I was sent is purple with green spots on it and looks pretty cool.

As someone who was sad that The Skulls broke up, I’m glad to see Billy Bones is still at it and still producing some quality punk rock songs and hopefully he’ll make his way out to the Midwest on a tour sometime so I can see the new act in person. In the meantime, this single will be getting some pretty frequent playtime on my turntable.