Along with reissuing the classic D.I. album I posted about last week, Nickel and Dime records also reissued another O.C. punk album that has been long out of print on vinyl. 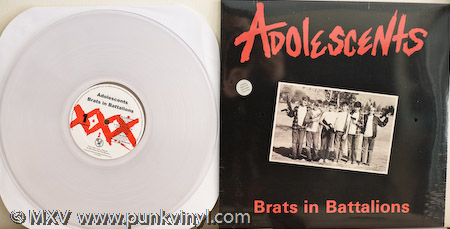 The second Adolescents album, which came out around 1986 has finally been reissued on vinyl. This was originally released on vinyl and cassette on the long defunct SOS Records. It never got the exposure that the band’s first album got and the lineup wasn’t exactly the same as that first album either. I can’t recall the story as to why the lineup change. It is a pretty solid album though and is easily worth owning and placing next to your copy of the “blue album”.

Nickel and Dime pressed up 1000 of these; 500 on clear vinyl (shown) and 500 on red vinyl. They did a quality job on the thing too. Want one for yourself? Check out the label’s website.