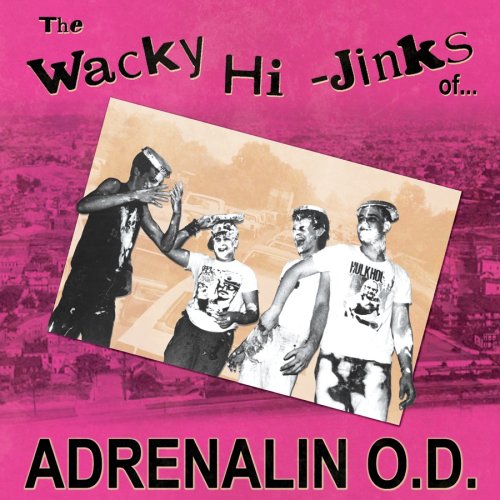 My initiation to Adrenalin O.D. (or AOD for short) came at the hands of a pair of compilations: Flipside Vinyl Fanzine Volume One (where their cover of the Brady Bunch theme cracked me up and was awesome) and We Got Power (where their blazing “World War 4” blew me away, and then ended with a cover of “Pop Goes the Weasel”).  That exposure put me on the path to seek out this album back when I was in high school, and AOD pretty much put New Jersey on the map for me as far as punk rock went. My love for AOD led me to discover that New Jersey was a hotbed of hardcore punk and I couldn’t get enough of it.Their blend of powerful hardcore with a hint of melody and their fun sense of humor really made them stand out from the hundreds of other hardcore bands popping up at the time.

When I got this album in High School, I pretty much wore it out from playing it so much. I viewed it back then as one of those essential hardcore punk albums that should be in every aspiring punker’s record collection and 25 years have passed and I still feel the same way. The songs on this album have withstood the test of time and sound every bit as good to me as they did to my teenage ears. The record has spent the better part of the last 15 years being out of print, only surfacing once on the Sittin’ Pretty collection that Grand Theft Audio released a long time ago on CD, which I am pretty sure is out of print now.

Chunksaah Records saw fit to make sure that this album wasn’t lost in obscurity and has given it a deluxe 2xCD reissue. On this disc is the original album, remastered and sounding far better than it ever did on vinyl (a fact that pains me to admit, but it’s true). It also contains their first EP, Let’s BBQ, which is a classic in its own right.

OK, so you fall in the category of owning Sittin’ Pretty and wonder what’s so different about this release? For starters the album and EP tracks do sound slightly better than the GTA release. This disc also contains a bunch of live material not found on the GTA release but it came at the expense of a few compilation tracks. This release comes with lyrics and liner notes by Jim Testa along with some great flyer scans and photographs. The bottom line is both release have stuff on them that makes owning both mandatory if you are a fan of the band. As a huge AOD fan, I know that both have a happy home in my collection and I was pretty stoked that this came out with some unreleased material on it in a nice package.

For those younger punks out there, do yourself a favor and pick this CD up, AOD influenced a lot more punk rock than you may realize and you owe it to yourself to brush up on your punk rock history. To old timers like myself, here’s a blast from the past that still sounds as good as ever that is well worth the price of ownership.