A label that has been dormant for a very long time now, nearly two decades in fact, has been resurrected and is back in action. The label in question is CD Presents who was home to the Avengers, D.O.A., the Subhumans, Tales of Terror, the legendary Rat Music for Rat People compilations, and of course, The Offs. 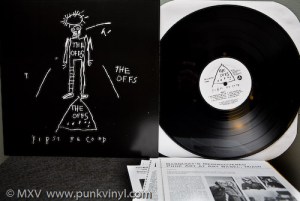 After releasing a pair of 7″ singles, The Offs found a new home with CD Presents who released this, their only full length album and their final release before disbanding. The Offs First Record came out way back in 1984 and the album is full of some really catchy art punk/ska songs. The band were way ahead of their time as a decade or so later that type of sound became a lot more popular. The album was released on  standard black vinyl along with a few hundred each on clear vinyl and white vinyl. 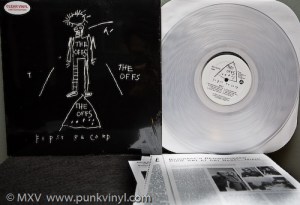 In the years since its initial release, the album became even more popular for its cover art, which was done by Jean Michel Basquet, who as legend has it wanted to join the band but instead of letting him join, they had him do their cover art for this album. At the time he was relatively unknown but years later he became quite popular among art collectors who started gobbling up used copies of this album which started fetching higher price tags on ebay because they were buying it for the artwork more than the music.

To celebrate this album’s

25th anniversary (well almost 26th now), CD Presents chose the album as the release to kick off the label’s rebirth. The original stampers were dusted off and a limited edition version was pressed and new covers were made with the exact same artwork and everything, right down to the label being identical to the original pressing. In fact the only way you can tell the difference to the original is that this new pressing has a slightly smoother and glossier cover printed on a slightly different and more modern stock, and the label typesetting has a bit of jagginess to it as it must have been scanned from an original record for this reissue.

This limited edition was done in a total run of 900 copies being evenly split up over three colors: black, clear, and white. That’s right, only 300 of each color were made. Included with each copy is some reproductions of old articles about The Offs and this record in particular which contain some interesting history.

The album is available either directly from CD Presents through their ebay store, or you can get it from Amazon. The label also has a very small number of original sealed pressings for sale along with the original test pressings in case you have a large tax refund burning a hole in your pocket.

Order the clear vinyl from amazon.com

Order the white vinyl from amazon.com

Order the black vinyl from amazon.com