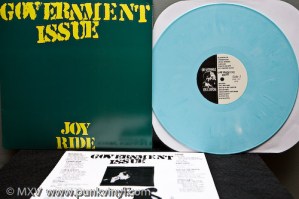 One of the finest punk rock records ever to come out of Washington DC just got a long overdue reissue on vinyl and that is the masterpiece titled Joyride by Government Issue! This was the band’s second album which originally came out in 1984 on Fountain of Youth Records and is easily one of their best albums, though it’s hard to pick a favorite since they put out so many good ones.

There’s a reason why the band was the longest lasting punk rock band ever to come out of DC and the reason was they were an amazing band. If you have lived your life in a cave, or are too young to have heard of Government Issue then this album would be a perfect place to start. I can’t begin to tell you just how many thousands of times I’ve listened to this album in the past 26 years and I still play it regularly even now.

The record has been out of print on vinyl since about 1990 but now it is back in print on vinyl courtesy of Doctor Strange Records. This new version has all the songs from the original Fountain of Youth release plus the two bonus live tracks from the German pressing on Aggressive Rock Prod. The cover retains the color scheme from the US version with the back cover art from the German version. Unlike the German version however, this version has not been artificially sped up a bit like the label did without the bands consent for their version back in 1984. The sound on this newly mastered version is top notch and the record probably sounds even better than it did on either pressing back when it was first released.

The album comes with a lyric sheet and is on standard black vinyl as well as a limited edition on baby blue vinyl. You can order both direct from Doctor Strange Records and the black vinyl edition should be easy to find at your local record store, at least any record store worth going to. Kudos to Doctor Strange for bringing back such an amazing record on the best format ever, and I hope the label will continue with some more vinyl reissues of the Government Issue back catalog.

Check back here very soon for a chance to win a test pressing for this record courtesy of Doctor Strange!