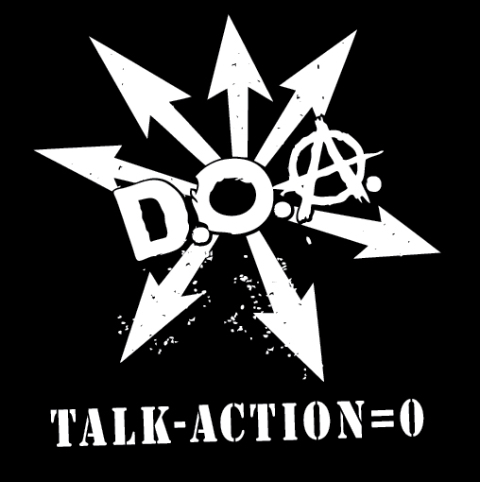 D.O.A. has been around in one form or another for over thirty years now. They are easily Canada’s most famous punk rock band and an all-around punk rock institution.

Talk – Action = 0 is the band’s 17th studio album in the 32 years they have been together. While many of the faces have changed in the band over the years, one thing that has always been consistent is the sound of D.O.A.. Much like the last 16 albums, this one is full of energetic, pissed off, punk anthems. Joey Shithead has the formula of mid-tempo sing-along punk songs that are usually politically charged down to a science. If there was a punk rock handbook of how to craft classic punk tunes, he’d definitely be one of the authors. Over three decades of playing music hasn’t stripped him of his youthful anger and snarl in his vocal delivery.

D.O.A. is one of those bands that if you like anything by them that any given album is a fairly safe bet since they never stray far from the formula that has worked for them in their career, much like the Ramones. The band proves on this album that they still can craft catchy punk anthems and are still a relevant band. Times may have changed but D.O.A. hasn’t and for old punk rockers that is a pretty comforting thing.

The faces have changed over the years but the music has remained consistent. Short punk rock anthems that are comforting like a good broken-in pair of shoes.