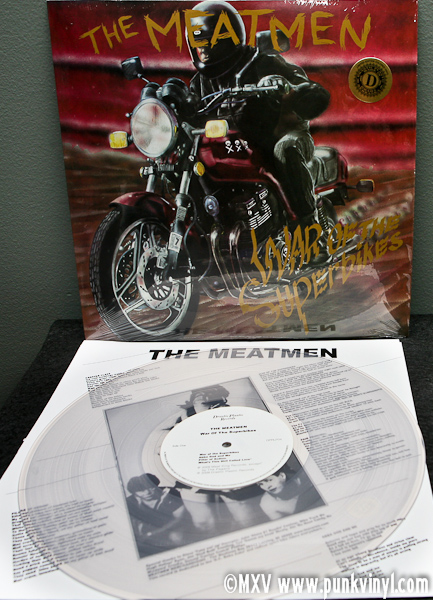 The Meatmen – War of the Superbikes vinyl reissue 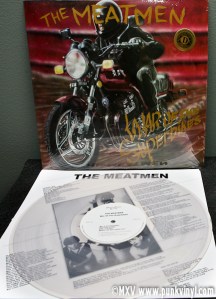 When I was a teenage punk rocker all I cared about was skateboarding, records, and video games. Now that I’m a middle-aged punk rocker most of that is still true as well. Back when I was a lot more resilient and skillful on a board, I borrowed the first Meatmen LP, We’re the Meatmen and You Suck from my friend Jamie Munroe. I kept it until I found a copy of my own and that LP was one of the major soundtracks of skateboarding that summer. It wasn’t long after that summer that The Meatmen put out their second full-length LP, War of the Superbikes.

A lot had changed between Meatmen albums. Tesco moved to Washington DC, he gave away Touch and Go Records and he had ceased publication of the fanzine as well. He also decided to carry on the legacy of The Meatmen, a band he started back in Detroit, with a new sound and a bunch of new members.

War of the Superbikes was a big departure from the frantic hardcore of early Meatmen material and instead rooted firmly in a more rock and metal vein while still maintaining the band’s trademark sense of humor and punk feel. It was a smart and bold move on Tesco’s part not to simply keep making hardcore records and the risk paid off as this album was very unique for its time and had a lot of quality songs on it. It was every bit as much fun as the early stuff but with a new twist. Some now-classics on this album include the epic, “Abba, God, and Me,” a song so catchy that I used to sing it in the shower and features some stellar heavy drumming, “Razamanaz,” which is a sing-along great, and a cover of the Pagans’, “What’s this Shit Called Love” that nearly rivals the original and does it justice. The album is a fun, punk n’ roll ride from start to finish and the music on it more than stands the test of time.

As with most punk rock records from the 1980’s, the availability of this album on vinyl ended along with that decade and the record has only been available on those silver plastic coasters ever since. Those of you who weren’t there at the time were stuck with this inferior medium or with the task of finding a used copy of this somewhere that wasn’t abused by drunk punks in the old days.  This problem has now been rectified with this vinyl reissue.

A new label from Nebraska, Drastic Plastic Records, has hit the record scene in a big way with a whole slew of high-quality reissues. This reissue is presented in as close to the original format as you can get with only a couple of minor differences. First off the cover preserves all the original full-color artwork exactly as it originally appeared, the only difference is the label information as this is no longer on the defunct Homestead Records. What is a nice little touch is that the Drastic Plastic logo on this record is made to look just like the old Homestead logo. The record comes inside a two-sided, glossy inner sleeve that is an exact replica of the one from the original pressing and includes the lyrics, photos, and credits. The record comes on clear vinyl, just like the first 1000 did on Homestead Records and the labels look identical to the originals too with the exception of the label information being obviously different but done in the same font! The attention to detail was a really nice touch and the package is top quality.

The record itself sounds wonderful and I believe even sees a small improvement in the clarity of the low-end. The mastering job was fantastic and the record has a good weight to it (145gm to be exact) and feels as high-quality as it sounds. It is great to see a new label come out of nowhere and deliver some really top-notch reissues of old treasures. If you want one of your own, check out the Drastic Plastic Records website if your local record shop is too foolish to stock this great record.