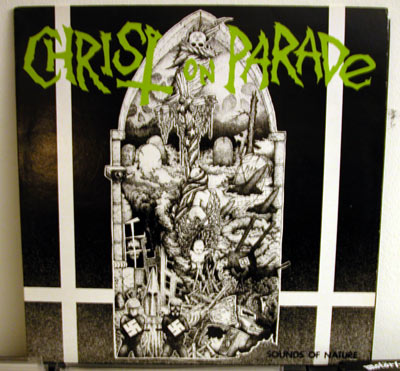 Selections from The Punk Vault [Christ on Parade]

I was in high school when a girl I was friends with told me about this band called Christ on Parade who played at a show she saw at Metro. They opened for a bigger punk band, but I forget which. I remember not going because I didn’t have a ride to the city. Anyway, she bought their record and told me she thought I’d really like it so she loaned it to me. I took it home and played it and was blown away. I was an instant fan and thus started kicking myself for not having gone to that show. I somehow talked the girl into letting me keep the record and I played it to death.

Christ on Parade were from San Francisco, CA and formed in the mid 1980s. To the best of my knowledge, they toured the US once opening for some bigger band like 7 Seconds or someone like that. This was their first record and it was released on Pushead’s label. After this record, they would part ways with their original singer and Noah, who played guitar, would handle the lead vocal duties. I do not know why the original guy left. The band put out a pair of 7″s and one more LP before disbanding.

After they broke up, Noah started a band called Blister who put out a 7″ and a LP and then broke up. He now plays in Neurosis, who were friends of Christ on Parade and played a a bunch of shows together with them. He joined sometime before their Through Silver in Blood album, which was easily the best thing they ever did. I don’t know what happened to the other guys who were in the band. A few years ago, everything except this record was reissued on a CD titled Insanity is a Sane Reaction on the now defunct F.O.A.D. Records, and unfortunately that means the CD is out of print (it also came out as a double green vinyl LP). This first album has never been reissued. There was a rumor years ago that Pushead was going to reissue it again but that never happened I’m afraid and thus a lot of people are missing out on a great record that deserves to be heard.

As always, if you were in the band or have any additional information to share please get in touch.